I’m fascinated by container ships. They’re my favorite metaphor for a connected world. When I visit port cities, I often try to drag friends with me to watch cranes load and unload stacks of interchangeable red, blue and grey boxes. For some reason, they’re often less enthusiastic than I am about sitting in a parked car in a bad part of town, watching the mundane aspects of global trade take place through a chain-link fence, one metal box at a time. (Then again, there are people who don’t find watching the blinking lights in a large datacenter fascinating either. I guess it takes all kinds.) 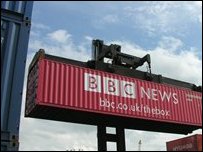 So, needless to say, I’m looking forward to the BBC’s new project, “The Box“. The folks at the Beeb have started a project with shipping line NYK designed to allow readers to track the movements of a single container over the course of a year. The container has been painted with a BBC URL and fitted with a GPS transponder, but otherwise will function as an ordinary container, carrying loads from one port to another. Its voyage will be visualized on a web map, giving viewers a sense for the vagaries of international trade. (Depending on whether BBC stacks the deck or not, this could also be a stunningly boring voyage, if the container simply cycles between Southhampton and Bruges.)

BBC says that the project was inspired by Marc Levinson’s excellent book, The Box. (My review of the book is here.) It could just have easily been inspired by William Gibson’s newest novel, Spook Country, which centers on the movements of a specific Maersk shipping container around the world. (Not his strongest recent book, but includes some excellent port scenes, so worthwhile for containerphiles.) Or by Brian Cudahy’s “Box Boats“, a useful complement to Levinson’s epic, focusing more on the evolution of ships and shipping lines and less on the containers themselves.

One of the goals of the BBC project is likely to help viewers visualize the complex networks that characterize our global world. It’s not hard to find examples of objects that seem to defy logic, but make perfect sense in a globalized world – Fiji water, for instance. But it’s harder to find good visualizations of the networks that underpin the connections between our different nations and economies. If we could map the travels of every container for a year, we’d likely learn a great deal about what countries are tightly connected to one another, about who exports to whom, when and how often. I’ve found it surprisingly difficult to find maps that show me where containers are going, either because construction of such a map would require cooperation of dozens of firms and hundreds of port authorities, or perhaps because such network maps would reveal vulnerabilities in global shipping networks. (If your goal is to get materials for a dirty bomb into the US, it would be useful to know what ports that regularly ship to Long Beach, CA are insecure. Fortunately, ABC already did this work for you – reporter Brian Ross packed 15 pounds of depleted uranium – very difficult to distinguish in terms of density and chemical properties than more dangerous forms of uranium – into a shipping container in Jakarta and sent it to Los Angeles. No problems with port security until ABC ran the story…)

I’m surprised at how few maps of networks I’ve been able to find, both in a daylong internet crawl, and in a pleasant though frustrating morning at the local university library. For the most part, maps that focus on economics, transport or communications tend to map statistics by coloring countries based on those factors – Ghana shows up in a light color on a map of airline passengers per year, while Germany shows up dark. Some of these maps are quite interesting – the fine folks at Worldmapper offer a collection of cartograms, maps distorted to show a particular statistic not by coloring a nation, but by changing the size of a country in proportion to a statistic. The map above features a view of the world distorted to show where the 1.6 billion air passengers per year originate from. (If you, like me, travel too much, you’re represented many times in this data set. The total number of people who get on an airplane per year is far fewer than a billion.) This sort of map is useful (possibly more useful than a standard world map colored to illustrate these statistics), but it doesn’t show us where those American flyers are going. It visualizes a phenomenon on a national basis, not on an interconnected one. The map above gets a little closer to what I’m hoping for, showing the prevalence of air travel by coloring countries and showing the prevalence of certain air routes by displaying arrows of varying widths. (This map is scanned from Oxford’s Atlas of the World, 13th edition. Score one for those dead tree libraries.) Detail from a map of steamship routes in the early 1900s, from a collection at Princeton University

But oddly, it’s hard to find something as comprehensive and rich as the map above, a visualization of steamship routes in the early 1900s, from a collection of maps at Princeton University. I’ve started to think of network maps of this type as “infrastructure maps”, or as “potential maps”. In other words, they tell us where connections potentially exist, but not how often they’re actually used. How many steamships travelled from New York to Pernambuco versus New York to Liverpool? What connections were vital to international commerce and which existed because ships needed a place to dock and refuel? Which connections were symmetrical, with goods flowing back and forth, and which represent colonies dependent on their home countries?

Looking for maps that show actual, rather than potential, flows between nations, I find myself looking at a lot of maps of communications data. Early in the Internet revolution, there was a deep interest in mapping the Internet. The visualization above is Bell Labs researchers, including Stephen Eick, Ken Cox, Taosong He and Graham Wills, and shows internet traffic on the NSFNET backbone in 1993, before the internet became it’s highly commercialized self. The colors of the arcs represent the activity of different links, with red links showing heavy traffic between countries.

The fine folks at TeleGeography offer this map of telecommunication flow between nations. The connections between countries are measured in terms of millions of international telephone minutes per year – they don’t reflect the actual, physical routing of those calls, but show the conceptual connections between those countries. Looking at a subset of the map, we quickly see that Turkey has a great deal of telephone traffic with Germany (reflecting the large number of Turkish immigrants in Germany), and much lighter connections with other European nations – the flows quickly tell us something about the relationships between different places in the globe. I’m searching for more maps that help visualize the connections between countries and cultures in a globalized world. One of the more promising sets of maps I’ve seen comes from Princeton’s International Network Archive, which offers a fascinating set of flow maps that look at arms, tobacco and some types of cultural trade. My favorite thus far is a simple interactive map that attempts to show how far places are from each other in terms of travel time, rather than geographic distance. As every traveller knows, it’s easier and faster to travel from New York City to London that New York City to Camden, Maine, for instance – this map takes an early step at redrawing the world in terms of the actual effort required to make a trip, not just the geographic distance.

Bonus link: A lovely, though sadly no longer maintained, collection of internet-centric maps at Mappa Mundi.

17 thoughts on “Mapping a connected world”