There’s a new, must-watch online video, “The Three Big Pigs”, that uses the wonderfully addictive mobile game Angry Birds to comment on political change in the Middle East… and American involvement in that change. It was featured today on online gamer community Kotaku, and it’s just the sort of clever, funny video that I suspect will go viral.

The Kotaku story doesn’t mention the author of the piece, but it’s brilliant Russian designer Egor Zhgun (Егор Жгун). Zhgun has a long track record of using popular culture remix to address political issues. His LiveJournal site is loaded with remixed movie posters, book covers and other pop culture artifacts. Many of the remixes rely on knowledge of Russian politics that are above my head, while others are more international in scope, like this issue of Kosvopolitan. (If this doesn’t make sense, it may be useful to remember that American enthusiasm for an independent Kosovo wasn’t shared by the whole rest of the world, and particularly upset people in countries with strong ties to Serbia.) 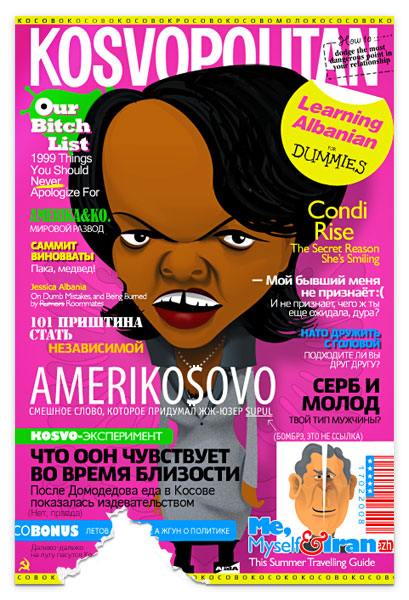 There’s not much available online in English about Zhgun – I was very gratified to discover that Global Voices had run a through article on one of his most famous images: Zoich.

For the 2014 Winter Olympics in Sochi, the Russian Olympic committee has involved the general public in designing and choosing the mascots for the game. This process became more than a little political when people began pointing out the similarities between one of the mascots – a polar bear – and the mascot of the 1980 Olympics… and the logo of the ruling United Russia party. Russian president Dmitri Medvedev (whose surname includes the Russian word for “bear”, “medved”), threw his public support behind the bear against competitors like a snow leopard and a hare, and apparently swung the results of the election.

Zhgun decided to design his own mascot, Zoich, and participate in the contest. The name derives from reading the year “2014” as a mix of Roman and Cyrillic characters and offering an approximate pronunciation. The creature itself is a reworking of the Hypnotoad from Futurama, as is the slogan. You can read this as Zhgun “ripping off” the Futurama character, or as remixing – given Zhgun’s track record of creative remix, and the emergence of Hyptotoad as a remixed internet meme, I think a more charitable reading is warranted.

Zoich was entered in the mascot contest, and quickly became a rallying point for the opposition, who saw the cute polar bear as a clear symbol of the ruling government. He wasn’t selected, but he is clearly visible on the front page of the web page featuring the official Sochi mascots (in a portrait hanging on the wall between the rabbit and snow leopard). Perhaps the contest organizers were happy that Zoich caught favor rather than some of Zhgun’s alternatives – in an interview with Zhgun on Lenta.ru, several other possible mascots make their appearance, including a reworking of Pedobear into a mascot.

There’s something very 2011 about a Russian video using a soundtrack from American cartoons and characters from a Finnish mobile phone game (based on an English fairytale) to satirize North African politics. (Whether Disney will choose to engage in some legal actions across national borders, as Zhgun is using audio from the 1932 short “Three Little Pigs” remains to be seen.)

Clearly, Angry Birds has become a cross-cultural touchstone, a piece of popular culture that you can assume a viewer has familiarity with no matter their national origin. Before seeing Zhgun’s video, my favorite Angry Birds “remix” came from Israeli television show Eretz Nehederet (“It’s a Wonderful Country”), which uses the game to satirize Israeli/Palestinian tensions and endless peace talks.

I’m excited to see the lulz crossing national borders, and happy to see Russian satire getting love from Internet users around the world. But it’s also very 2011 to see cool ideas spread with little credit to their originators. So enjoy Three Big Pigs, and spend a moment or two checking out the rest of Zhgun’s work – it would be exciting to see him get some love outside the Russian blogosphere.