At the end of the Rio Olympic men’s marathon, silver medalist Feyisa Lilesa did something extraordinary, important and dangerous. As he crossed the finish line, he crossed his wrists in front of his forehead in a gesture that’s halfway between “hands up, don’t shoot” and “X marks the spot.” 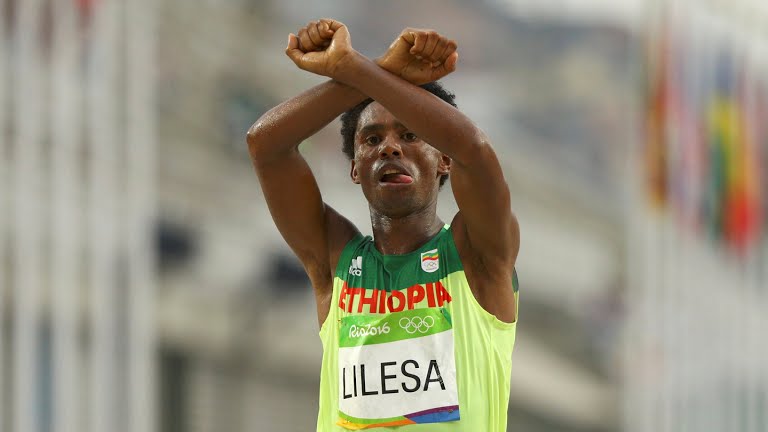 The gesture is sign of defiance that has become a symbol of Ethiopia’s Oromo rights movement. An unprecedented wave of protests in Ethiopia by Oromo and other ethnic rights groups is rocking Ethiopia, which is one of Africa’s most repressive states. By showing support for the protesters in his native Oromia, Lilesa has brought international attention to a movement that’s been violently suppressed by the government, with over 400 civilians killed.

He has also put himself and his family at risk. Defiance of the Ethiopian government can lead to imprisonment or to death. Ethiopian colleagues of mine at Global Voices served eighteen months in prison for the “crime” of learning about digital security, so they could continue to write online about events in their country. Fearing arrest or worse, Lilesa has decided to remain in Brazil, and may seek asylum there or in the US. A GoFundMe campaign has raised almost $100,000 to contribute to his legal and living expenses. But the real challenge may be reuniting Lilesa with his wife and children, who remain in Ethiopia.

The Olympics have an uneasy relationship with protest. While states threaten boycotts of each others’ games – and occasionally follow through on those threats – athletes who bring politics into the arena have been sharply sanctioned. When Tommie Smith and John Carlos raised their fists in a Black Power salute after winning gold and bronze in the 200 meters in 1968, both were suspended from the US Olympic team, expelled from the Olympic village and sent home. (Peter Norman, the Australian silver medalist, who supported their gesture and wore a Olympic Project for Human Rights badge in solidarity, was not sanctioned, but was shunned by his country’s Olympic committee and never raced again.) While the Olympic movement does not appear to be taking action against Lilesa, unfortunately, that’s likely the least of his problems.

I wrote two weeks ago about my fears that attention to the Olympics and the endless US political campaign would distract people from these protests in Ethiopia. I argued that international attention may help protect the lives of Ethiopian activists, as the government will be forced to face the consequences of how they treat their dissenting citizens. Lilesa has helped ensure that the Olympics would include a healthy dose of Oromo rights. Now it’s time to do our part and ensure that Lilesa and his family don’t pay for his actions with their lives.

I gave to support Feyisa Lilesa’s relocation fund, and encourage you to do so as well. Here’s hoping he can return home someday soon to an Ethiopia that makes space for dissent. Unfortunately, that’s not the Ethiopia the world has now.