Home » Blog » Blogs and bloggers » Protests in Minsk: Nice while it lasted

Protests in Minsk: Nice while it lasted

For the last several days, rumors have been circulating in the Belarus blogosphere that the unprecedented protests in October Square in Minsk wouldn’t be allowed to continue until Saturday, the anniversary of the declaration of an independent Belarussian Republic in 1918. Milinkevich had asked his supporters to rally on Saturday, giving supporters a chance to return home, get supplies and prepare for a major demonstration. Still, many protesters – including, by some reports, Milinkevich himself, stayed in the square.

It was pretty exciting while it lasted. Last night, at 3am, Belarussian security forces began arresting demonstrators and pulling them out of the square. At least 200 protesters were detained and taken to pre-trial detention centers. Milinkevich was not detained, and pledged that the Saturday rally would take place as planned. 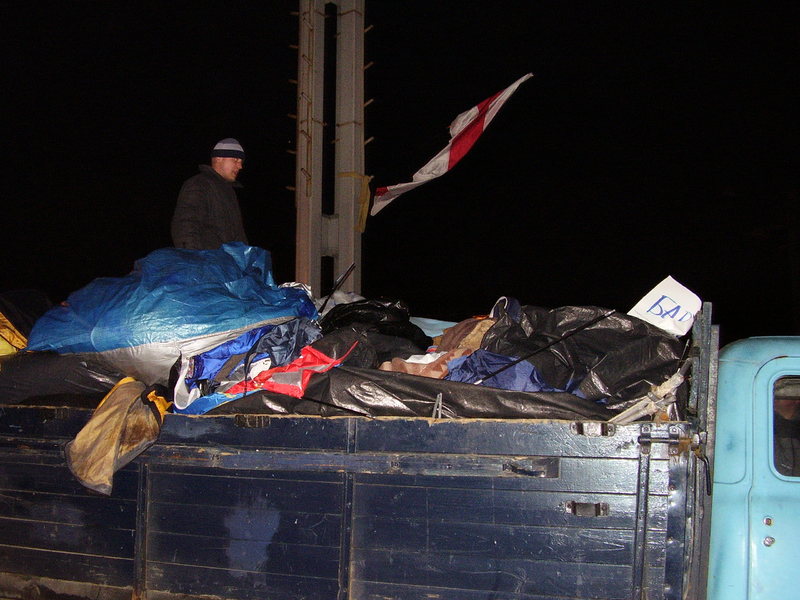 Veronika Khokhlova, GV’s Central and Eastern Europe editor, has a thorough roundup of reactions to the arrests. A Russian language weblog has a powerful collection of photos from the square after the protesters were taken away – empty tents, signs and banners on the ground, a garbage truck filled with the detritus of democratic protest.

Hang on brothers and sisters.

This is only the beginning.
The spring is coming!
Luka’s plan – “it will just die down” – did not work.

Let each one of us become a news agency for our houses and apartment buildings – talk to people, make and distribute your own leaflets, counter the state lies. There are no other news sources of true information.
//Please, no calls to riots

3 thoughts on “Protests in Minsk: Nice while it lasted”