My friend Daniel Beck doesn’t travel as much as I do (nor do most airline pilots), so the constant background noise of cable “news” isn’t a sound he’s learned to tune out. (I try very hard not to fly through Atlanta because I find the deafening roar of every TV tuned to CNN more than a little disconcerting.)

every time I’ve flipped through the channels in my hotel room this weekend, or walked past one in an airport, which has been an uncommon lot of flipping and walking-past-of, I’ve been shown one of three things:

…all accompanied by that steady stream of breathless, intense Newscaster Voice, which seems to sound the same whether it’s announcing the invasion of a city or a little old lady getting punched in the face. Minor variations on the above available from — I counted — nine different news channels, apparently at all hours of the day or night.

Was this just a weird weekend, during which nothing real happened, but some inconsequential things happened to have some lurid footage? Or is this normal?

It was kinda a weird week newswise. It’s not that nothing happened, just that the things that happened are especially difficult to contextualize for cable news. Bush in Latin America talking about trade policy? Boooring. A complex story about possible White House corruption in the firing of US attorneys for being insufficiently ideologically biased? Yawn. (I’m joking. They’re just the sort of stories that it’s hard to imagine covering well in 90-second video clips.) What it led to was one of the more interesting Google News frontpages I’ve seen in a long time: two Africa stories heading the top stories column. The second is a hard story to televise – another UN condemnation of the ongoing genocide in Darfur, continued intrasigence from the Khartoum government with the support of China. The second is one that should have been all over the TV news… with the small difficulty that it would have been more or less impossible to get video footage.

On Sunday, leaders of both factions of the opposition MDC movement in Zimbabwe attempted to hold a rally in the Highfields neighborhood of Harare. Because protest meetings and rallies have been banned in many parts of Harare, the meeting was billed as a “prayer vigil” proclaiming “Zimbabwe will be Saved” – friends in the know report that everyone knew the meeting was a rally.

Any rally in Harare is subject to being shut down, often with police violence – see the video from a march held last year by the Zimbabwean Council of Trade Unions for a sense for how rapid and violent police presence can be. But this crackdown appears to have been especially brutal, leading to the accusation that the police intended to kill Morgan Tsvangirai, former opposition presidential candidate and major opposition figure. From early reports, it was hard to know whether Tsvanagarai and his colleagues would die in custody, an event that might well spark the explosion that would finally end Mugabe’s regime. 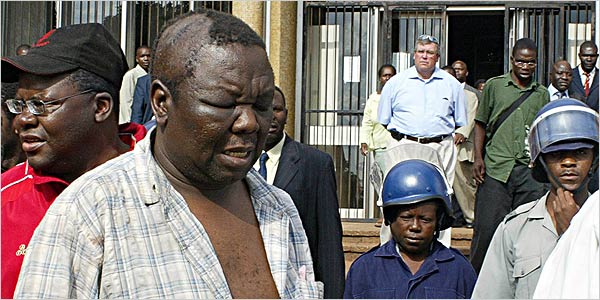 Tsvangirai appeared in court today showing very serious injuries from his time in police custody, including a head wound and a severely swollen eye. According to the police accounts, this was the result of “resisting arrest.” Right. At today’s hearing, neither prosecutors or police showed up for the hearing and judges released the activists. One of the lawyers for the activists speculates that the police were so busy beating activists that they didn’t bother collecting sufficient evidence to bring a case in court.

There’s a couple of problems in putting a story like this onto cable news – one is that the story requires quite a bit of context to understand, and most people aren’t up on the backstory. The other key ingredient is that virtually no one has a formal press presence in Zimbabwe. The only major international news network present is Al Jazeera International – their coverage of the incident was, to my eyes, fair, critical of the government and quite responsible. This is reassuring – many media watchers had worried that AJI would be forced to bend over backwards to accomodate the Mugabe government to maintain presence in Harare.

The NYTimes story reporting on the release of Tsvangarai has a Johannesburg byline, as do most stories about the violence. Reporting comes from Zimbabwean reporters who clandestinely pass information to newspapers and agencies outside the country – they do so at great personal risk. The photo above was taken by Desmond Kwande, a Zimbabwean photographer who’s been arrested and harassed for documenting images of the struggle for freedom in Zimbabwe. Take a good close look – the risks Kwande is taking in bringing this photo to AFP boggle my mind. It’s a shame that you won’t see it on CNN – there’s probably another grandmother mugging that’s more important for American audiences to see.

My friend Bev Clark, who works with activists in Harare, has some important reflections on what this latest rally means and what it might take for a majority of Zimbabweans to rise up and take action:

I’ve been seeing Zimbabwe like a cake lately. Morgan Tsvangirai, Raymond Majongwe, Mike Davies, Grace Kwinjeh (etc) are the candles burning big and bright. The icing is made up of a small section of civic and political activists. While the actual cake itself comprises the Zimbabwean people. And until we, the Zimbabwean people, come to the party and support civic and political leaders working for change, then not much will happen. The cake has got to cook. It’s got to get, warm, and bake and maybe even burn, but it can’t stay like it has – unmovable.

Because if it does, no matter how many Highfield rallies we have, and no matter how iconic Tsvangirai becomes, the struggle for freedom in Zimbabwe will remain lop-sided.

I’m feeling sorry for Tsvangirai. Because he’s been assaulted, together with many other comrades, but also because I wonder whether he’ll succeed with his most important challenge? Which is to persuade Zimbabweans to join him / in the flesh / in person and on the streets and present a unified rejection of the Mugabe regime. For the last 4 years it’s been a case of “you go first” (Tsvangirai to the people) or “you go first” (the people to Tsvangirai). This needs to change.

My friend Isabella Matambanadzo has a moving tribute to Gift Tandare, who was shot and killed by authorities in the violence this weekend.