Amanda Atwood was complaining a week back about Zimbabwe’s $750,000 notes: “most of us aren’t very comfortable operating in base 75,” and even those who learn to count with the bills discover that they don’t buy much – they’re insufficient to purchase a newspaper.

Her post was titled, “Bring on the (hundred) million dollar bearer”. And Gideon Gono, the comically incompetent central bank governor, has done one better, introducing $10 million bills. They’ll buy a newspaper, and perhaps a kilo of sugar… though probably not for much longer. The bills are worth about $4 USD on the black market, but with inflation at over 50,000% a year, they won’t keep their value more than a couple of weeks. 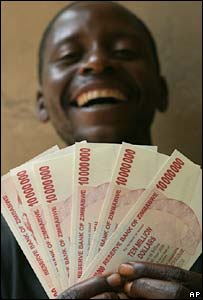 I was struck by the image above, stolen from the BBC’s piece on the new bill. The bill is exactly the same color, layout and design as a $20 bill I’ve been carrying in my wallet since my trip to Zimbabwe 15 months ago. That bill has now expired – it wasn’t currency, per se, but a “bearer check”, entitling me to $20 from the Zimbabwe Reserve Bank if I redeemed it before July of 2007.

At a certain point in hyperinflationary nations, people simply stop using currency and return to the barter system. This is hugely inefficient for developed economies – imagine paying your cable bill in bags of flour. (This isn’t entirely far-fetched. When my father worked as a small-town lawyer two decades ago, at least one outstanding bill was settled in cordword. But it’s pretty inconvenient.) That hasn’t happened entirely in Zimbabwe. Instead, Zimbabweans find themselves aware of prices in several different currencies, purchasing essential goods like toothpaste from “runners”, who smuggle cases of goods in from Botswana or South Africa. Buying petrol requires either shopping on the black market, or having access to dollars, pounds or rand to buy the vouchers that can be exchanged for petrol. And, of course, people get it wrong, like a businessman who gave his employees sufficient holiday bonuses to let them travel to their villages and back… until the cost of busfare tripled, and his employees were stranded at home.

When I was in Zim, I was astounded by the resiliency of the people living there, their ability to adapt to impossible circumstances. But as I watch Zim bloggers spend more and more of their time and energy figuring out how to keep modest amounts of food on the table, I wonder how much longer a situation like this one can go on.